by David A. Burton 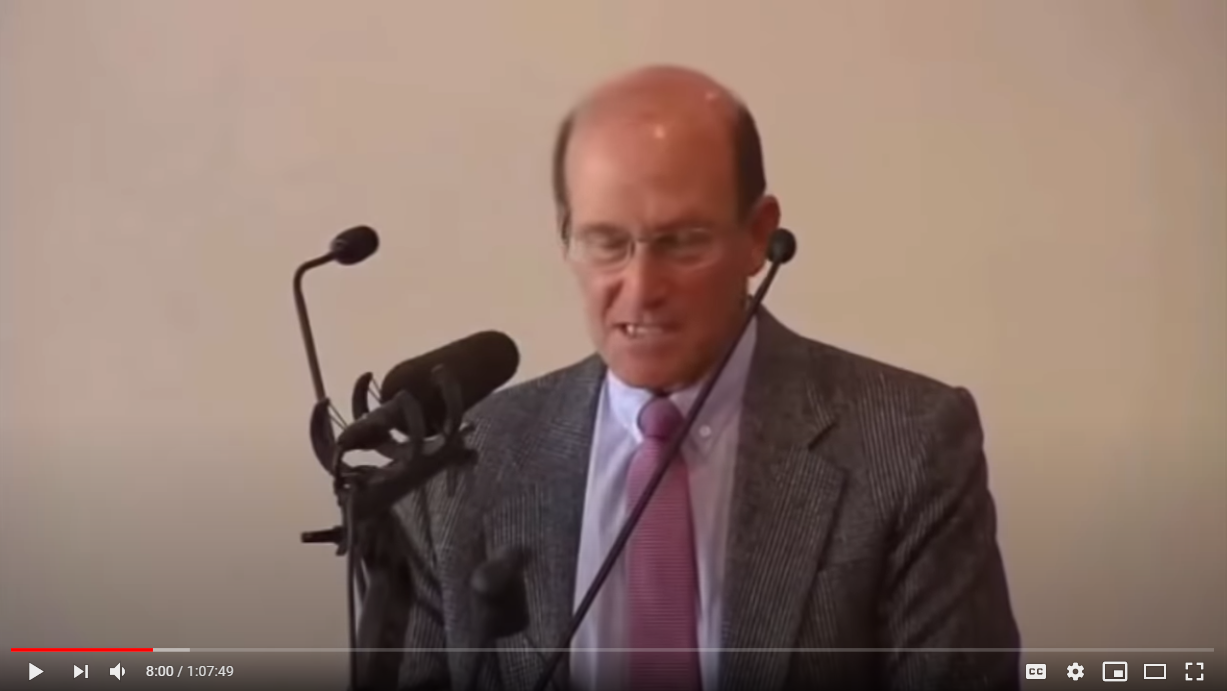 This was exactly right:

57:18 "Reproducing the known temperature is 20-20 hindsight. It's not a strong test of predictive skill."

If you want to watch Feynman, himself, discuss the key to science, I have that clip on my channel, here:
https://www.youtube.com/watch?v=LIxvQMhttq4 ‍‍‍‍‍‍ ‍‍


But it's mostly bad news. Much of what Dr. Salby said is just plain wrong. ‍‍‍‍‍‍ ‍‍


8:30 "X Correlation between CO2 and temperature -- positive lag, where changes of CO2 follow changes in temperature, maximizes with a lag of 10 months"

Over the course of a year, you can find just about any correlation you want, according to where you take the measurements, simply because CO2 and temperature both have seasonal cycles (in most places).

But those seasonal cycles vary greatly in both sign and magnitude. (He appears to have arbitrarily picked Mauna Loa for CO2, and some unknown location(s) for temperature -- he doesn't say.)

Showing that two signals with seasonal components are correlated does not tell you anything about whether one of them is affecting the other, nor which one is affecting the other. It only tells you that both are affected, directly or indirectly, by the Earth's annual cycle around the Sun. ‍‍‍‍‍‍ ‍‍


10:00 "Native emissions of CO2 depend strongly on temperature"


11:02 "CO2 must therefore evolve like the integral of temperature"

WRONG. That ignores the anthropogenic component.

The seasonal fluctuations in CO2 level are dominated by natural sources and sinks, but the long term trend is dominated by anthropogenic emissions. ‍‍‍‍‍‍ ‍‍


13:13 "Temperature and CO2 evolve coherently on all timescales longer than a couple of years."

If you compare the CO2 and Temperature scales you can see that it shows about 90 ppmv difference between glacial maxima and interglacials, and it shows about eventual 8-10 ppmv CO2 change per °C of warming, in the long term (near the poles, from ice core data).

Of course, since temperature at the poles probably varies more than elsewhere, the global average temperature change is thought to have been only perhaps half the polar change (though that seems to currently hold true only in the northern hemisphere).

That suggests that the Earth has, in the past, gotten about 15-20 ppmv CO2 increase per 1°C of warming. But that’s at approximate equilibrium, after thousands of years. Over shorter time periods the amount of CO2 from warming is less.

How much less? Well, from paleoclimate reconstructions from ice cores, reversals in CO2 trend generally lag reversals in temperature changes by hundreds of years (200 to 1000 years). If it takes, on average, 500 years for a reversal in the direction of the temperature trend to be reflected by a reversal in atmospheric CO2 level trend, that suggests it takes about that long to realize half of the eventual CO2 response from a 1°C change in average global temperature.

That means that in just seventy years you would realize less than 1/4 of the full 15-20 ppmv, so certainly less than 5 ppmv, from 1°C of warming.

But in the 70 years since 1958, atmospheric CO2 levels have risen by about 95 ppmv, as temperatures increased only 0.5 to 0.7 °C (depending on whose temperature index you believe).
Ref for CO2: https://sealevel.info/co2.html
Ref for temperatures:

That indicates that the warming could have caused at most about 3 ppmv of the measured 95 ppmv CO2 increase. ‍‍‍‍‍‍ ‍‍

Phase is pretty much meaningless for non-cyclical signals, it's just an artifact of inappropriate Fourier analysis. ‍‍‍‍‍‍ ‍‍

Actually, the mixing of air samples from successive years and decades in the ice cores "smears" the CO2 level signal, acting as a lowpass filter. It removes high-frequency / transient changes, but it has little effect on the low-frequency / long-term signal. ‍‍‍‍‍‍ ‍‍


25:10 "Their underestimation increases with timescale."

Not true. In a matter of decades, the firn is compressed into ice, which halts the mixing. ‍‍‍‍‍‍ ‍‍

There are two problems with that. One is that once the firn is compressed into ice, there's no more degradation of the signal. His graph showing the degradation soaring as the ice gets older is simply wrong.

Additionally, he's looking at the wrong thing. We don't care about variance, we care about long term trend, and that does not degrade significantly. ‍‍‍‍‍‍ ‍‍


25:54 "That means the change in the atmosphere is much greater than the change apparent in the ice."

Wrong. You can't see year-to-year fluctuations in CO2 level in the ice cores, but you CAN see long term trends. ‍‍‍‍‍‍ ‍‍


26:42 he showed a graph in which the further back in time you go the more the CO2 signal in ice cores diminishes, and he said, "...a change of proxy CO2 on a timescale of 100,000 years then underestimates the atmospheric change by a factor of fifteen... swings of proxy CO2 of 100 ppmv during the glaciation cycle can derive from changes in the atmosphere of over 1000 ppmv."

That's completely wrong. He's hypothesized a mechanism that clearly doesn't exist, which (he says) causes a dramatic progressive diminution of the ice core CO2 levels, the farther back in time you go.

It is easily seen from the ice core records that this is wrong, because each of the glaciation/deglaciation cycles over the last half-million years show similar CO2 levels, varying about 90 ppmv between glacial maxima and interglacials:

If Salby were right then one of these two things would have to be true:

2. Or else the Eemian had to have atmospheric CO2 levels which were over 1500 ppmv (and we know that isn't so, because of other evidence, like leaf stomatal density), and earlier interglacials would have to have had even higher (much higher!) CO2 levels (which we also know isn't so).

Since we know for a fact that neither of those things are true, Sably's hypothesis cannot be correct.

It is true that it is the high-frequency transients that are damped by diffusion. But at 30:32 he said "low frequencies, long time scales... are strongly non-conservative" (and he said it again 2 minutes later). There's no basis for that. ‍‍‍‍‍‍ ‍‍

(But at 40:38 he shows a graph with approximately correct figures.) ‍‍‍‍‍‍ ‍‍

36:25 "It's approximately balanced by native sinks, which absorb about as much -- the key word: approximately. Because native sources and sinks are two orders of magnitude stronger..." [that's a bit of an exaggeration!] "...even a minor imbalance can overshadow the human source."

That would be true were it not for the fact that powerful negative feedback mechanisms work to correct such imbalances.

That's about right. But that's a lot! ‍‍‍‍‍‍ ‍‍

Actually, we do have some satellite measurements of that, now, though they're rough.
https://www.nasa.gov/mission_pages/oco2/index.html ‍‍‍‍‍‍ ‍‍


40:00 "net global emission... varies between years dramatically... do I need to tell you that human emission doesn't do anything like this?"

Irrelevant. Transient perturbations like ENSO, major volcanoes, droughts, etc. cause fluctuations. How is that interesting or surprising? ‍‍‍‍‍‍ ‍‍

Completely wrong. The human signal is VERY apparent. If there were no human influence, you'd see net global emission fluctuating around zero: sometimes positive, and sometimes negative. But because of the large human input, net global emission has been positive every single year for at least sixty years. ‍‍‍‍‍‍ ‍‍

Wrong. Temperature variation accounts for most of the small fluctuations in CO2 level, but almost none of the long-term trend over the 60 year measurement record. ‍‍‍‍‍‍ ‍‍

Not really true. E.g., flaring natural gas prevents the emission of methane, and emits CO2, instead.

Additionally, methane released into the atmosphere has an average residence time of only about a decade, before it oxidizes into CO2 and water. So emitting methane now produces CO2 eventually. ‍‍‍‍‍‍ ‍‍

Cute. But, actually, energy from fossil fuels makes people much more prosperous than they otherwise could be, and prosperity enables people to afford luxuries... like cows. ‍‍‍‍‍‍ ‍‍

Wrong. Just like with CO2, the fact that short-term fluctuations are largely explained by temperatures says nothing about the cause of the long-term trend. ‍‍‍‍‍‍ ‍‍


46:42 "In blue is the induced component of CO2. It's determined entirely by surface properties."

...while showing a graph of MEASURED CO2 level (rising due to anthropogenic emissions)!

49:57 "Let there be no ambiguity... the black curve is just the integral of temperature, scaled by the observed sensitivity of CO2 emission."

Complete nonsense. He'd have you believe that the anthropogenic CO2 just vanishes from the atmosphere, and that CO2 level is increasing by more than 2 ppmv each year simply because global mean temperatures are now about 1°C warmer than they were during the Little Ice Age.

Why is nobody in that room laughing? ‍‍‍‍‍‍ ‍‍


56:17 "To maintain equilibrium, the surface must therefore also transfer heat away mechanically, through conduction, and convection."

And evaporation. The water cycle is the most important mechanism which cools the surface of the earth. Evaporating water absorbs latent heat at the surface, and transports that heat from the surface to the mid-troposphere, where the water vapor condenses. ‍‍‍‍‍‍ ‍‍


58:08 "...the mean is free of decadal variability... it follows that on those timescales the models have no predictive skill."


58:26 "Notice, this is the same timescale responsible for almost all the 20th century warming."


59:00 He should be graphing CO2 on a log scale, because the warming effect of additional CO2 is logarithmically diminishing.

Even so, he's right that the GCMs (models) are not skillful. ‍‍‍‍‍‍ ‍‍

Complete nonsense. "Integral of temperature" is not even a meaningful quantity.

1. Dr. Murry Salby is one of several people who claim that the reason atmospheric CO2 levels are rising is not because of mankind's CO2 emissions, but, rather, because the oceans are outgassing CO2, because of global warming. They are wrong.

2. The most thorough examination of the cause of rising CO2 concentration which I've found is this very clear and comprehensive analysis, by Ferdinand Engelbeen. ↑