CNN vs. what the science says.
https://www.cnn.com/2019/08/27/politics/cnn-climate-crisis-town-hall-democrats/index.html

Washington (CNN) CNN on Tuesday announced the candidate lineup for its unprecedented prime-time event focused on the climate crisis.

The science says: "the climate crisis" is a myth. It is a product of politics & superstition, not science.


The science says: there is no cause for "alarm." The "scientists" who "sound the alarm" are acting as activists, not scientists. There is no consensus among scientists that manmade climate change is harmful at all, and the best evidence is that CO2 emissions are beneficial.
Who says so? Over 30,000 American scientists, that's who!
Read about the "Global Warming Petition" which they signed, here.

Along with the candidates, the network also announced the CNN journalists and the approximate appearance times for the presidential hopefuls during the seven-hour, live event.
CNN previously announced that Chief Climate Correspondent Bill Weir will join in the questioning throughout the evening.
A CNN poll conducted in late April showed that 96% of Democrats favored taking aggressive action to slow the effects of climate change. And Democratic activists in recent weeks have sought to elevate the issue, urging candidates to make climate change a priority.


The science says: "the effects of climate change" are modest and benign. Learn more here.

The United Nations -- which projects that temperatures will rise to 1.5 degrees Celsius above pre-industrial levels by as early as 2030 -- has warned that governments must take "rapid, far-reaching and unprecedented changes in all aspects of society."


The science says: "pre-industrial" means the harsh "Little Ice Age" (LIA). Scientists call the current warm period a "climate optimum," because it is unambiguously improved, compared to the pre-industrial LIA.
Nobody knows just how much colder the Earth's average temperature was during the LIA, but most estimates are about 1°C, so we've already seen about 2/3 of that "1.5 degrees Celsius" of warming -- and it has been beneficial, rather than harmful. By 2030 we're likely to see only another 0.1 to 0.2 °C, not 0.5 °C, but even another 0.5°C would be hardly noticeable.
Climate activists rarely mention how challenging it is to measure the tiny temperature differences which characterize “global warming.” This graph, contrasting different global temperature indices, illustrates the problem. Even for the last sixty years, estimates of “measured” warming vary by a factor of two! Earlier time periods are known with even less certainty, and projections for the future are most uncertain of all: 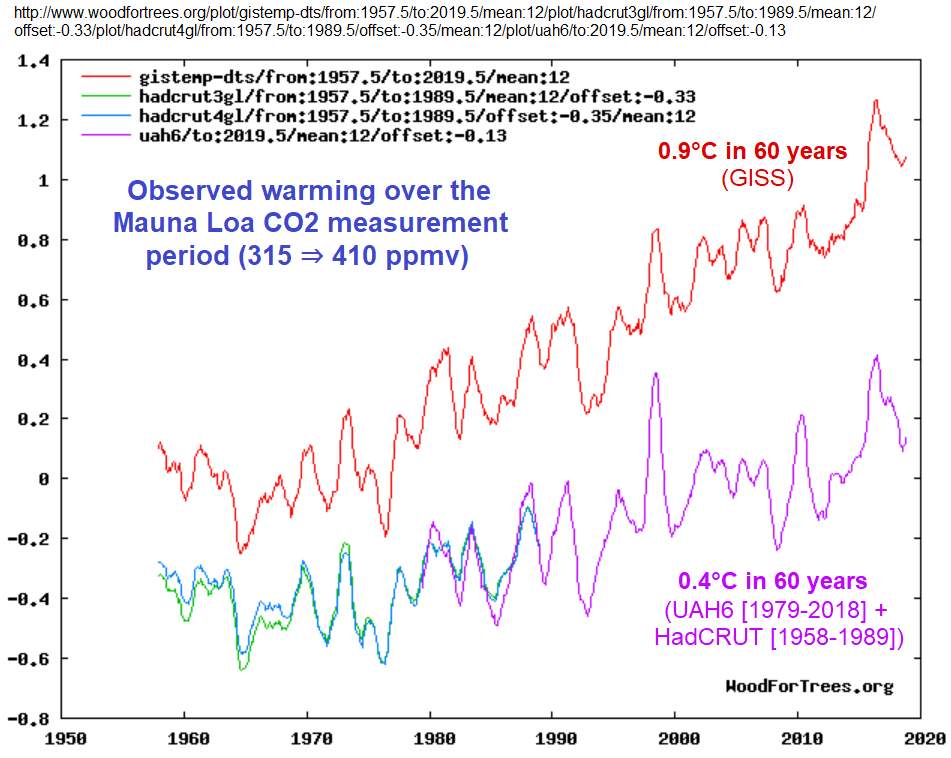 (click any image on this page to enlarge it)

Global warming would have several devastating consequences. It would cause coastal cities to disappear under water, leaving hundreds of millions of people displaced and forced to migrate to dry areas. Some plants and animals would face extinction, and drought would result in lower crop yields.


The science says: that's nonsense. There will be NO "devastating consequences" to manmade global warming. It has had NO detectable effect on sea-level trends, it has NOT caused plants and animals to go extinct, and it has NOT worsened droughts. Additionally, THOUSANDS of agricultural studies have proven that higher CO2 levels IMPROVE plants' water efficiency and drought resistance, REDUCE damage to crops from droughts, and greatly INCREASE crop yields.
If you understand graphs, then it should be obvious that rising CO2 levels have not affected sea-level:

That's one of the highest-quality sea-level measurement records in the world, from a near-ideal central Pacific location, on an old, tectonically-stable island, with little or no vertical land motion, and a very typical sea-level trend.
Here's what that very slight rise looks like on the ground. These are two photos of the Moana Surfrider Hotel, on Waikiki Beach, in Honolulu, taken nearly a century apart. Does it look like sea-level rise is a problem?

The benefits of extra CO2 for crops have been known to science for over a century. It is so dramatically beneficial that commercial greenhouses use CO2 generators to elevate daytime CO2 levels to 3-4 times outdoor levels. The benefits are so great that way back in 1920 Scientific American called it "the precious air fertilizer." From this photo, which accompanied the article, you can certainly see why:

The latest warning signs of a climate crisis include meteorologists recording July 2019 as the hottest month ever recorded on Earth and Greenland lost 12.5 billion tons of ice to melting on August 2, the largest single-day loss in recorded history.


The science says: The widely repeated claim that July, 2019 was the hottest month ever is based on faulty data. It was warmer than average, but the best data indicates that it was only approximately the 4th warmest of the last 41 years.
For as long as we have measurement data, Greenland has been slowly losing ice. In an average year it loses about 200 billion tonnes (Gt) of ice, which sounds like a lot, but it is actually negligible. It is equivalent to less than three-hundredths of an inch of sea-level. I.e., at the current rate, meltwater from Greenland will contribute to less than three inches of sea-level rise by year 2100.
At the current rate, to melt entirely it would take the Greenland Ice sheet 100 to 150...
...you thought I was going to say "years," didn't you?
Nope, not years.
Not decades, either.
Centuries. 100-150 centuries.
The rate of ice loss from the Greenland Ice Sheet fluctuates, but there's no evidence of a sustained acceleration due to manmade climate change. In fact, in both of the last two glaciological years, Greenland had no net loss of ice at all (which is unusual).

The town halls will air exclusively on CNN, CNN International, CNN en Español, CNN.com's homepage, across mobile devices via CNN's apps for iOS and Android, via CNNgo apps for Apple TV, Roku, Amazon Fire, Chromecast and Android TV, SiriusXM Channels 116, 454, 795 and the Westwood One Radio Network.
CNN previously announced that the town hall audience will be drawn from Democratic and independent voters and stakeholders interested in the issue and no public tickets will be available.


In other words, CNN is stacking the audience with leftists, and making sure that no dissenters sneak in.