My name is David Burton. I'm an IPCC Expert Reviewer, I've published in the academic literature on sea-level rise, I was appointed to the NC Sea Level Rise Impact Study Advisory Committee, I'm a member of the CO2 Coalition, a Board Member and Science Advisor to NC-20, and I created the SeaLevel.info web site, which features climate change information and on-line sea-level analysis tools.

Climate science is so politicized and commercialized that much of what you hear is nonsense.

For instance, you've heard there's a scientific consensus that CO2 emissions help warm the planet, and that's true. But do you realize there's no consensus that it's harmful? 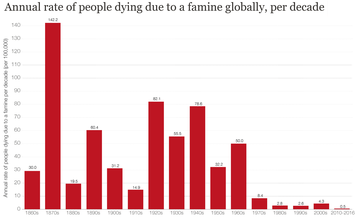 In fact, scientists call warm periods “climate optimums,” and the best evidence is that manmade climate change is benign, and CO2 emissions are beneficial, for both mankind and natural ecosystems. I'm one of over 30,000 American scientists who've signed a “petition” attesting to that fact.

CO2 is “plant food.” Some of you might remember when terrible famines were often in the news, in places like Bangladesh. Famine was one of the great scourges of humanity, the third Horseman of the Apocalypse. The 1918 flu pandemic killed 2% of the world's population, but the global drought & famine of 1876-78 killed 3.7% of world population.

But famines have become rare, and one of the reasons is rising CO2 levels, which have increased worldwide agricultural productivity by about 20%, and made crops more drought-resilient.

The supposed harms from rising CO2 levels are just hypothetical, but the benefits are huge. Those benefits are well-measured, by thousands of agricultural studies. It's why commercial greenhouses use CO2 generators to raise CO2 levels, by about eight times as much as we've raised outdoor CO2 levels, so far: because it makes the plants much healthier, and faster-growing.

Direct impacts of global warming are obviously benign. We're on track for at most a little over one degree Celsius of additional warming by 2100, probably less. That's like a latitude change of about 70 miles south, or planting one week later.

So folks promoting solar and wind boondoggles hype other supposed harms, like sea-level rise, or extreme weather, or polar bears, or coral reefs. But those problems aren't actually happening.

CO2 has been rising steadily for 2/3 of a century, yet sea-level rise has not accelerated, hurricanes are not worsening, strong tornadoes actually declined, and the polar bears & coral are fine.

We should not try to reduce carbon emissions. But there are things we should do.

We should play to our strengths. NC has a top-five nuclear engineering program at NCSU, rated better than Georgia Tech, or any California school. We should support that work, and encourage development of innovative nuclear power technologies, like thorium, and molten-salt reactors, for reliable, affordable base-load power generation, to free the world from its reliance on fossil fuels – which wind and solar can never do.

If you have any questions, I'm available after the meeting, or call me anytime.