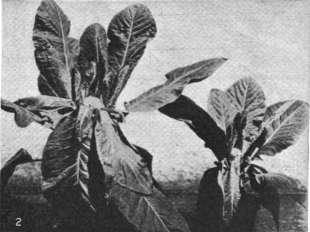 1. Yield of potatoes in fields over which the air was fertilized with carbonic acid gas and left unfertilized.  2. A similar comparison for cauliflower plants.  3. An open-air carbonic-acid fertilizing plant.

Fertilizing the air with carbon dioxide to promote plant growth

ONE of the principal constituents making up the body of a plant is carbon, representing about one-half of its organic substance. The opinion that this carbon is derived from the soil has long been abandoned, modern investigation having shown atmospheric carbonic acid to be absorbed by means of the chlorophyl or green matter of the leaves and decomposed into its elements, the carbon, in conjunction with the root sap and atmospheric moisture, being worked into organic compounds.

Whereas atmospheric air at present is relatively poor in carbonic acid, of which it contains only about .03 per cent, at an early period in the development of our planet, when this was covered with the luxuriant forests our coal deposits are derived from, it comprised incomparably greater quantities of this gas. This fact suggested the idea of heightening the fertility of the soil by increasing its carbonic acid content and thus producing conditions resembling those of antediluvian ages. In order to enable such a process to be carried out on anything like a commercial line, a cheap source of carbonic acid had, of course, to be provided.

This was found by Dr. Fr. Riedel of Essen-on-Ruhr in the combustion gases escaping from all factories, but most abundantly from blast-furnaces, and which so far had been allowed to flow out into the atmosphere without serving any useful purpose. He accordingly set to work designing a process for which patents were obtained and which was put to practical tests on a large scale. Three greenhouses were at first erected, one of which served as testing room, while the two others were used for checking purposes. The testing room was supplied with purified and burnt blast-furnace exhaust gases through a line of punctured piping traversing the whole greenhouse in a forward and backward direction. The gas supply was started on June 12th, that is to say, at a time when plant growth was at its height.

On account of the careful cleansing and complete elimination of constituents such as sulfur, the gas was found to exert no harmful effects. On the contrary, even a few days after starting the test, there could be observed In the testing room a more luxuriant vegetation than in the checking houses. The leaves of the castor-oil plant in the greenhouse supplied with gas were found to reach more than one meter in span, whereas the largest leaf in the checking houses was only about 58 centimeters in width. Plants submitted to the influence of carbonic acid gas also showed a marked advance with regard to their height. With the tomatoes planted in another part of the greenhouse a crop of 29.5 kilograms was obtained for a given number of fruits, the weight of the same number of fruits in the testing room being 81.3 kilograms, that is, 175 per cent more. With the cucumbers planted at the same time a somewhat slighter difference was noted, the yield in the checking houses being 138 kilograms, in the testing house, however, 235 kilograms, corresponding to an increase in yield of 70 per cent. An interesting phenomenon noted in this connection was that, while the cucumbers in the checking houses would exhibit bright spots, those in the testing house, on account of the more plentiful formation of chlorophyl were of a dark green color throughout.

Experiments in the open air were made simultaneously with these greenhouse tests, a square plot of ground being encircled by punctured cement pipes from which a continuous supply of exhaust gases was escaping. The wind, mostly striking the ground at an angle, would drive the carbonic acid in a variable direction toward the plants, thus allowing extensive areas to be supplied with the fertilizing gas. On the opposite side of the greenhouse plant there was provided for checking purposes a plot of the same size submitted to no carbonic acid gas, the soil in the two plots being of the same quality. Samples were derived from the best portions of the checking field, but from the center of the field submitted to the action of carbonic acid gas, the increase in yield in the case of spinach being found to be 150 per cent, with potatoes 180 per cent, with lupines (a legume) 174 per cent, and with barley 100 per cent. The potatoes in the field submitted to the action of carbonic acid gas were found to ripen much more quickly than in the checking plot.

The testing plant in view of these surprisingly favorable results was eventually extended, three greenhouses of the same size as those existing being added, while the small open-ground plant was increased considerably and more extensive grounds—30,000 square meters—were provided with an underground central pipe and branch pipes encircling lengthy plots. Especially favorable results were obtained on this field with potatoes, a 300 per cent increase being recorded in connection with tests on a large scale.

All experiments so far made go to show that fertilizing the air by means of carbonic acid gas is a much more efficient process than even an increased fertilization of the ground with stable manure and cow dung. If, on the other hand, a plot fertilized from the air. at the same time be submitted to soil fertilization, the latter, on account of the increased need for other elements (nitrogen, phosphorus, potassium, etc.) entailed by the increased absorption of carbonic acid, can be driven much farther than otherwise.

According to Dr. Riedel's calculations an iron works dealing in its blast-furnaces with about 4,000 tons of coke per day will daily produce as much as 35 million cubic meters of combustion gases, containing 20 per cent carbonic acid gas. This is such an enormous amount that even in the case of a partial utilization most extensive plots of ground can he supplied with the precious air fertilizer. Dr. Riedel therefore believes that carbonic acid works for supplying agriculture will before long be quite as common a feature as electricity and gas works, the large industrial centers at the same time becoming centers of increasing agricultural production.

Careful analysis has shown the increase in the percentage of carbonic acid in the air to remain far below the limit where the gas becomes liable to endanger the health of man.

In the Netherlands, carbon dioxide from industrial plants is being recycled to help plants grow in greenhouses, in a process called “Carbon Capture & Utilization” (CCU), exactly as Dr. Friedrich Riedel envisioned a century ago.

Google search for other copies of this article: https://www.google.com/search?q="Carbonic+Acid+Gas+to+Fertilize+the+Air"

Archive: https://archive.today/8fUws (cite snippets by selecting them and copying the URL from your browser's address bar)

I've tried to mimic the typography and punctuation of the original article as closely as possible, except for Web features like hyperlinks and “responsive design” layout adjustments for viewing on small-screen devices. Click on the pictures for higher-resolution versions. If you notice any problems, please contact me.

This is the abstract of a 1920 German-language book (or here), on the same topic:

Carbonic acid and plant growth, F. Bornemann (Kohlensäure und Pflanzenwachstum. Berlin: Paul Parey, 1920, pp. VI+110, figs. 11). This is a review of investigations, including those of the author, bearing on the relation of carbon dioxid to plant growth and on the conditions of culture and fertilization which determine the carbon dioxid content of the soil and air surrounding plants. The general conclusion is that notwithstanding the inexhaustible supply of carbon dioxid in the atmosphere there is ordinarily not enough of this gas in the plant environment for maximum growth, hence the importance of adopting methods of fertilizing or other means that will increase the supply of carbon dioxid available for plant use.

A scan of the book is available here. There's also a bio for Herr Bornemann (or here), which mentions his work on CO2 fertilization.

In his famous 1908 book, Worlds in the Making, Svante Arrhenius emphasized the beneficial effects of anthropogenic CO2 on temperatures, but he also mentioned CO2 fertilization.

The Oct. 1, 1921 Saturday Evening Post also had a very long article on the same topic (or view the originial scanned copy).