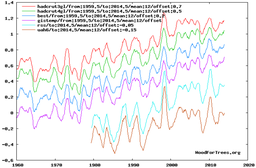 “Climate Sensitivity” is a measure of the (in)stability of the Earth's temp­er­a­tures, most commonly defined as the globally averaged temperature increase to be expected from a doubling of atmospheric carbon dioxide (e.g., an increase from 300 ppmv to 600 ppmv). (See also TCR and ECS.)

The most straightforward and obvious way of estimating climate sensitivity to a doubling of CO2 is by examining the result of the “experiment” which we've performed on the Earth's climate, by raising the atmospheric CO2 level from about 311 ppmv in 1950 (or 285 ppmv in 1850) to about 408 ppmv in 2018. We simply examine what happened to temperatures when the atmospheric CO2 level was raised by 31% (or 43%), and extrapolate from those observations.

However, there are a few pitfalls with that approach. For one thing, natural global temperatures variations due to ENSO can be larger than the “signal” we're looking for, so it is important that we choose an analysis interval which avoids those distortions. For another, it would be a mistake to assume that all of the warming which the Earth has experienced since pre-industrial conditions was due to anthropogenic CO2, because much of that warming occurred when CO2 levels were still very low, and because we know of other factors which must have contributed to warming, such as rising levels of other GHGs, and probably aerosol/particulate pollution abatement.

So the key question is, how much of the warming can be attributed to rising CO2 level? In the calculations below, the assumed answer to that question is an explicit parameter, “A” (for “Attribution”).

You can calculate an estimate of TCR sensitivity, using the time period and temperature index of your choice, as follows:

The formula is very simple:

For example, to capture most of the period of rapid CO2 level increases, while avoiding distortions from major ENSO spikes, we could use the period 1960-2014:   (click on the graphs to enlarge them)

Over that period, CO2 level rose from about 317 ppmv in 1960 to about 399 in 2014. Depending on which temperature index you trust, temperatures rose by about 0.5 °C (HADCRUT3) or about 0.75 °C (GISS), or somewhere in-between (or even less, according to the satellite-based lower troposphere temperature measurements). Let's use the midpoint of the surface indices, 0.625 °C: 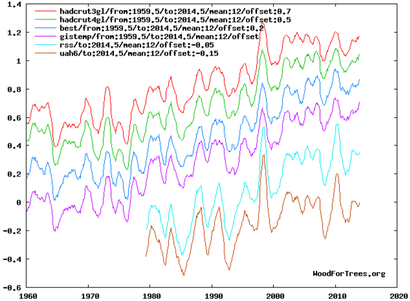 Note #1: ECS is usually estimated to be about 1½ × TCR.
See: http://sealevel.info/glossary.html#ecs

Note #2: the above discussion doesn't mention minor GHGs like O3, CH4, N2O & CFCs. To take them into account, there are two simple approaches you can use. One is to substitute estimates of “CO2e” (CO2 equivalent) for C1 and C2. The other is to adjust A to account for the fact that some portion of the warming (perhaps one-fourth) is due to other GHGs.

Other than that, the attribution factor, A, is really just an educated guess, but it is based on expert opinion. The American Meteorological Society frequently surveys meteorologists and asks them what percentage of the last 50 years' warming they attribute to “human activity” (presumably mostly GHGs). This bar chart is from their 2017 survey report: ↑ 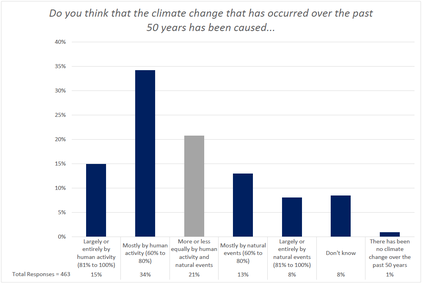 Note that our calculation includes the effects of both positive and negative temperature feedbacks.

The ECS/TCR ratio is sometimes estimated as high as 1.65:1. If we use that multiplier we could get the ECS estimate up to 1.34 °C per doubling of CO2, which is still slightly below the IPCC's “low end” estimate of 1.5 °C per doubling.

It is very difficult to approach the IPCC's “midrange” ECS estimate of 3°C per doubling, or the CMIP5 models' average assumption of 3.2°C per doubling, using this sort of analysis.

More resources, and other approaches and results ↑

• Atmospheric Physicist Richard Lindzen has a new white paper covering this topic, which concludes that climate sensitivity in excess 1.5°C is very unlikely: https://co2coalition.org/publications/on-climate-sensitivity/ In a 2012 lecture, Prof. Lindzen discussed an innovative approach to estimating climate sensitivity, starting at 35:46 in this video. The calculation is based on measurements of evaporation rate changes, and it results is a sensitivity estimate of about 0.8°C per doubling of CO2. ↑

• Bates 2015 used satellite measurements, and calculated an ECS (EfCS) sensitivity of about 1°C. ↑

• Barrett (archived here, and mostly circa 2011, archived here) calculates a TCR sensitivity of 1.84 ±0.11 °C. (To the extent that the 20th century's warming was natural, or due to unaccounted for anthropogenic forcings, the TCR sensitivity would be lower.) ↑

• Christy & McNider (2017) (or preprint) attempted to account for volcanic and ENSO distortions (like Santer et al 2014). They measured an underlying rate of climate warming of 0.096°C/decade, and calculated a lower tropospheric TCR climate sensitivity of +1.10 ±0.26 °C per CO2 doubling. The paper is quite long, but here's a readable discussion. ↑

• Nir Shaviv has a good web page on this topic, entitled, On Climate Sensitivity and why it is probably small. ↑

• Willis Eschenbach used CERES satellite data to determine the warming effect of a 3.7 W/m² forcing, and found it to be less than 0.4°C, which suggests a low climate sensitivity value. ↑

• For another innovative approach to estimating climate sensitivity, which results in an estimate of ECS rather than TCR, I can recommend this blog post by “SteveF” at The Blackboard climate blog:

...and this follow-up:
SteveF's approach yields an ECS estimate of 1.55°C/doubling, but it is dependent on an accurate estimate of the radiative forcing from a doubling of atmospheric CO2 levels. That is usually estimated as (SteveF assumes 3.71 W/m²). However, that's probably too high. Atmospheric physicist Will Happer has found evidence that CO2's “radiative forcing” is commonly overestimated by about 40%. If that is correct, it means CO2's forcing is only about per doubling, which would reduce ECS to about 1.1°C/doubling. ↑

Note: the effect of GHGs on radiation balance at TOA is similar, but not identical, to the effect at the Earth's surface. Here's a discussion.

• In 2014, the American Physical Society held a balanced panel discussion, with experts on each side of the climate debate, which included a discussion of climate sensitivity. The APS has the transcript on their web site (or here), and I've written to them, asking for a copy of the recording of the event. ↑

• Climate sensitivity estimates in the scientific literature vary wildly, but have generally been declining, as discussed on the sealevel.info Resources page.

• Additional resources related to this topic can be found here:
https://www.sealevel.info/resources.html#sensitivity 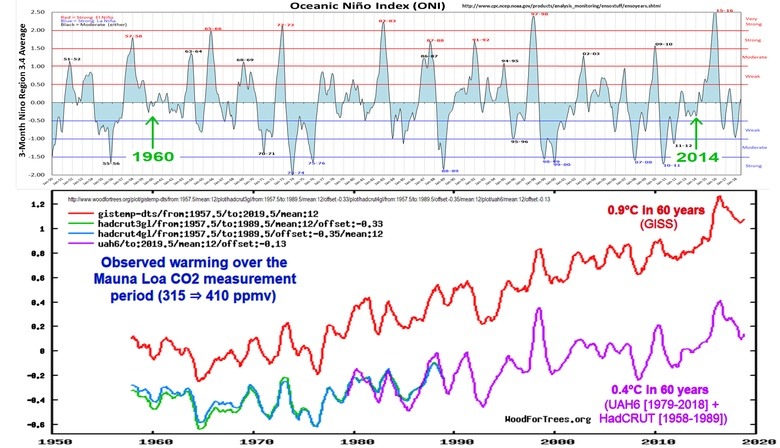