Note: This page is intended to contain a complete list of all significant known or hypoth­e­sized climate feedback mechanisms. If you notice any errors or omissions, please tell me.  -DAB

In Systems Science, a “feedback” or “feedback loop” is a mechanism through which the output of a system loops around or “feeds back,” and affects an input to the same system (which, in turn, affects the output, which affects the input, etc.).

A positive feedback is one which causes a same-direction response, so it tends to increase (amplify) the effect of a change in input. ↑ 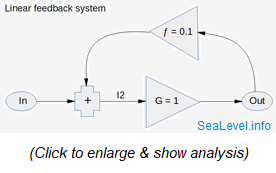 In general, in a linear system, a feedback ƒ causes a “compounded” net amplification (or attenuation, if ƒ is negative) which multiplies the original effect by . ↑

(Caveats: In practice, delays in the feedback path may mean that the full amplification effect of a positive feedback isn't immediately seen. Also, these calculations assume linearity, but most systems are not perfectly linear, though many are approximately linear over ranges of interest.)

A negative feedback is something which causes an opposite-direction response, and thereby reduces the magnitude of the effect of the change. (Exception: if there are delays in the feedback path, very strong negative feedback can cause oscillations in the system, but that's beyond the scope of this little primer.) ↑

The thermostat in your home is an example of a negative feedback mechanism (albeit a highly nonlinear one). It reduces the effect on indoor temperature of input changes, like changes in the weather, or someone leaving a window open.

Negative feedbacks abound in nature, especially in biological systems, such as your own body. E.g., if your body overheats, you will sweat in reaction to your elevated body temperature. Evaporation of perspiration cools your body: a negative feedback.

“Course corrections” are another example: When you are driving your car, and it drifts toward the edge of the road, in reaction to that drift you reflexively nudge the steering wheel toward the center of the road: a negative feedback.

Of course, natural feedback mechanisms are rarely perfect simple, immediate, linear multipliers of a system output, though that's very often a useful approximation. Analyzing more complex systems is beyond the scope of this primer, but a few rules-of-thumb are worth noting:

Feedbacks are at the center of the climate debate. The direct warming effects of anthropogenic greenhouse gas emissions are known to be small, but climate alarmists believe that those slight warming effects will be multiplied dramatically through positive feedbacks, with catastrophic consequences. I find scant evidence of that.

The remainder of this article is a list of known and theoretical climate-related feedback mechanisms, grouped into negative feedbacks, positive feedbacks, and feedbacks of unknown sign.

Here's another (much shorter) list of climate feedbacks, with some useful discussion and references:
https://www.azimuthproject.org/azimuth/show/Climate+forcing+and+feedback#list_of_feedbacks